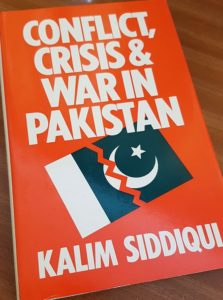 This book, an extract of which is available via the link below, can be seen as having a particular significance in Dr Kalim’s intellectual development. It was both the culmination of one phase of his life – with a focus on Pakistan – and the starting point of another, which led to the establishment of the Muslim Institute.

Dr Kalim was deeply committed to Pakistan throughout his life. His political understanding had been shaped by the Pakistan movement, which he had seen from the outset as one aiming to establish an Islamic state. As such he, like many others, had been deeply disillusioned by the secular nation-state that emerged. As a youth in Karachi in the years after partition, he had been part of a ‘Khilafat Group’ aiming for the transformation of the new state into an Islamic state. When he came to London in 1954, it was at the suggestion of the leadership of this group and with the aim of returning to Pakistan to continue working with it.

However, the group did not survive the 1950s, and has his understanding matured, Dr Kalim understood both that its political thinking had been inadequate, and that the challenge posed by the power of the west and the secular westernised establishment in Pakistan was far greater than he had previously realised. In London in the 1950s and 1960s, he developed a broader understanding of the Muslim world, and a deeper understanding of the nature of western imperalism, the impact of colonialism of colonised societies, and the problems facing countries like Pakistan. It was his determination to understand these elements that drove his academic career in the 1960s, culminating in his PhD on social conflict in Pakistan.

At the same time, he was watching political developments in Pakistan. In 1969-70, he travelled there for his PhD fieldwork, and was there for some of the crucial political dramas leading to the country’s civil war and break-up. For him, like many other Pakistanis, this was a period of intense personal anguish, as they witnessed the political failure of the ideals to which they had committed their lives. This was quite apart from the suffering of millions of ordinary people in the resulting conflict, including members of his own family.

Conflict, Crisis and War in Pakistan is a product of this personal experience. It combines the insight of his academic work and the passion of his commitment to Pakistan as a cause and a project, rather than a nation-state. This is well expressed in his preface to the book, included in the section attached below. Also included is the first chapter, on the legacy of the colonial period.

Link: Conflict, Crisis and War in Pakistan (1972). This file will open as a PDF in a new tab or window.